The Illuminati Jewish Plan for European Genocide is succeeding. 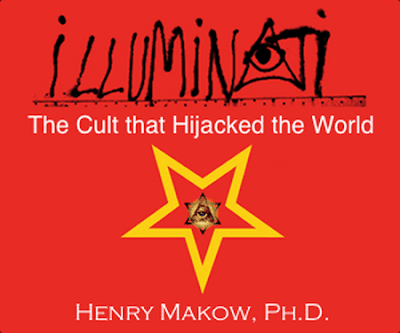 
Never have a people embraced their political and cultural demise with such complacency as the dimwitted denizens of Europe, North America and Australia.

Do not direct your resentment at immigrants who are just trying to better themselves, as our own ancestors did.


Direct your anger at our political and cultural leaders who, as agents of the central bankers, are colonizers and traitors.


The causes of mass migration are still cleverly concealed by the system, and portrayed as inevitable by multicultural propaganda. ... What they want to present as an inevitable and spontaneous phenomenon is actually a deliberate long term plan to destroy the face of the continent.

One of the main initiators of the process of European integration was the man who designed the genocide plan of the Peoples of Europe. The elite consider him the founder of the European Union. His name is Richard Coudenhove Kalergi.

"The man of the future will be of mixed race. The races and classes of today will gradually disappear due to the elimination of space, time, and prejudice. The Eurasian-negroid race of the future, similar in appearance to the Ancient Egyptians, will replace the diversity of peoples and the diversity of individuals. Instead of destroying European Judaism, Europe, against her will, refined and educated this people, driving them to their future status as a leading nation through this artificial evolutionary process. It's not surprising that the people that escaped from the Ghetto-Prison, became the spiritual nobility of Europe. Thus, the compassionate care given by Europe created a new breed of aristocrats. This happened when the European feudal aristocracy crashed because of the emancipation of the Jews [due to the actions taken by the French Revolution]" 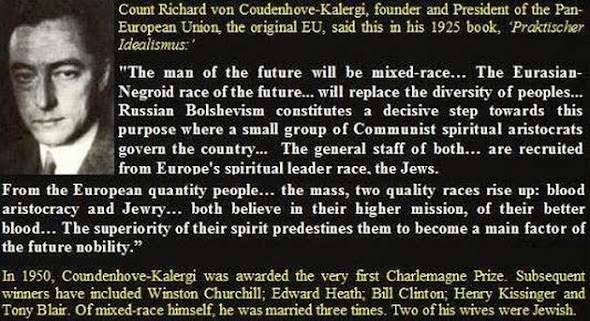 If we look around us, the Kalergi plan seems to be fully realized. We face Europe's fusion with the Third World. The plague of interracial marriage produces each year thousands of young people of mixed race: "The children of Kalergi». Under the dual pressures of misinformation and humanitarian stupefaction, promoted by the MSM, the Europeans are being taught to renounce their origin, to renounce their national,racial an cultural identity.

The servants of globalization are trying to convince us that to deny our identity is a progressive and humanitarian act, that "racism" is wrong. It is necessary, now more than ever, to counter the lies of the System, to awaken the revolutionary spirit in Europeans. Every one must see this truth, that European Integration amounts to genocide. We have no other option, the alternative is national suicide.


Remember, USA is already under Illuminati/Bilderberg control as owners of the Central Bank,the largest banks,newspapers and TV stations,yes,even the Hollywood film production. Top positions in the government are filled by Bilderberg members. As representative for the Vatican and the UN European migration,Peter Sutherland is a Bilderberg representative,as is the British Chancellor of the Exchequer and the German Minister of Finance,to name a few.

The Bilderberg Group - Planning on a New World Order

Every year since 1954, the secretive Bilderberg Group (named after the hotel they first met in the Netherlands), comprising elite powerbrokers from Europe and North America, has met to discuss, and influence, the changing global, political, economic and social landscape.


In the early 1990s, a relatively unknown Home Affairs spokesman for the Labour Party, Tony Blair, was invited to a Bilderberg confab. By 1997, he was Prime Minister of Great Britain. Similarly, in the late 80's, a little known Governor of Arkansas by the name of William Clinton gladly accepted an invitation to a Bilderberg. A few years later he was leader of the so-called 'free' world.

Margaret Thatcher has expressed her support for non-Bilderberg member Smith. Why? Because Bilderberg took the decision to oust Margaret Thatcher and replace her with John Major. This was confessed by Thatcher in conversation with Jim Tucker - former editor of the Spotlight newspaper which was closed down by the Anti-Defamation League because it was 'anti-Semitic.' Tucker spent his life exposing and tracking Bilderberg meetings - that means he hates Jews of course.

William Hague was the Bilderberg member who provided the shill, phoney 'opposition' to Tony Blair at the last general election. He forwarded a weak anti-European posture which failed dismally. This equated any anti-European (anti-Orwellian power block) mindset as being outdated and smeared with preconceptions of association with the laughable Tory election campaign. Europe is good and loving, sovereignty is evil, right-wing, racist, outdated, Satanic and nefarious. It's true, I read it in the newspaper. And who owns the newspapers? The Bilderberg Group.

Surely senior officials of the World Trade Organization, Federal Reserve, Financial Institutions like Rockefeller (the man himself), the EU and UN World Government models, and corporate oil conglomerates couldn't belong to the same group as the leading politicians and the media? Well, they do. They all belong to the Bilderberg Group.

So, who belongs to the other quasi-secret steering organisations such as the Council on Foreign Relations and the Trilateral Commission? The same people. The Globalist New World Order.

I list below a summary of Bilderberg members. This is by no means an exhaustive list. There are over 50 members who refuse to be named. These representatives attended the June 2000 meeting in Belgium at the Chateau du Lac Hotel in Genvel, near Brussels. The group releases a short press statement, outlining their operation to have a good old think about things but not implement any policy. So when the show is over these elite power broker mainstream policy makers just go home and have a cup of tea. I'm being sarcastic, by the way.

The Members and who they Represent

Royalty
--- NL: Queen Beatrix - Her Majesty, the Queen of the Netherlands and of the House of Orange.


PS - I didn't even have time to list all the University Professors, mainly based in the USA. College campuses, just like schools, are Globalist brainwashing camps.

Circulate far and wide. The 3rd law of physics - the butterfly effect - however small your influence it will ripple out and have a further influence. SPREAD THE WORD. DEATH TO THE NEW WORLD ORDER.

"In politics, nothing happens by accident. If it happens, you can bet it was planned that way."
Franklin D Roosevelt

Illuminati/Bilderberg have now successfully concluded the next step in their  plan for total world domination in their New World Order by scaring millions of Muslims into Europe with ISIL,created and funded by the US (Bilderberg), and are now trying to cover their tracks by joining Russia and other countries trying to eradicate ISIL from several countries.


In less than 20 years we will all be minorities in our own country and probably under the rule of Islam.

It is essential that all migrants are only given a temporary stay until it is safe to return to build up their countries again.  Emigration and human rights laws have never envisaged this kind of mass migration,and must be altered accordingly to save our countries from genocidal extinction.

WAKE UP PEOPLE !!  BEFORE IT IS TOO LATE. DEMONSTRATE TO YOUR GOVERNMENTS IN THE STREETS !!