Why TISA Is More Scary Than TTIP Or TPPA

Why TISA Is More Scary Than TTIP Or TPPA 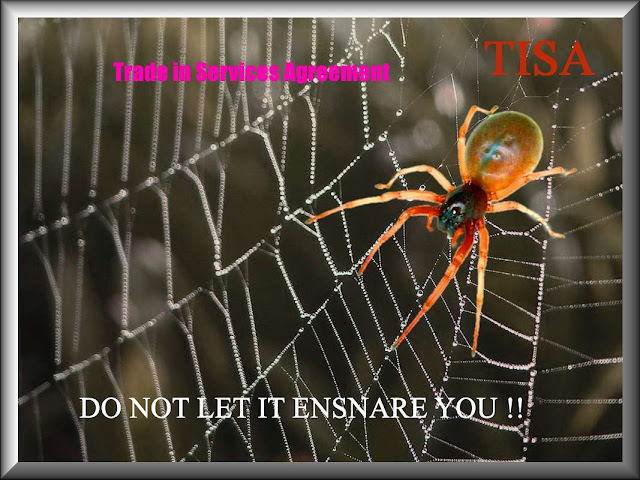 On Wednesday, June 18th, 2014, WikiLeaks’ publisher Julian Assange announced the publication of a secret draft letter of the Trade In Services Agreement (TISA). TISA is a controversial global trade agreement which brings with it concerns that it will make it easier for corporations to operate and profit across borders with impunity.

This global trade agreement, promoted by the United States and the European Union, covers 50 countries and is being opposed by anti-globalization activists and global trade unions. The TISA deal is expected to promote privatization of public services in countries across the world, and ease regulations in other sectors.

According to WikiLeaks, the level of secrecy surrounding these trade negotiations is even higher than the also controversial Trans-Pacific Partnership Agreement (TPPA) or the Atlantic equivalent (the TTIP), which have been headline news for much of this year.
Jane Kelsey, a law professor at the University of Auckland who analyzed the leaked documents for WikiLeaks, says that the secrecy of these TISA negotiations “exceeds even the controversial Trans-Pacific Partnership and runs counter to moves in the WTO towards greater openness.”
In April, demonstrations broke out in Geneva, the hometown of the WTO, as diplomats met secretly for the sixth round of negotiations over TISA, which will regulate international activities in a wide range of service industries such as finance, telecommunications, transportation, as well as local utilities such as water. The protestors were demanding that the draft text be released publically for discussion, but it has remained a secret until now.
One group that is very concerned about TISA is Public Services International(PSI), a global trade union that federates public service workers in 150 different countries. PSI issued a special report titled “TISA versus Public Services,” and in it they explain that TISA threatens to allow multinational corporations to permanently privatize vital public services such as transportation and health care in countries all around the world.

PSI General Secretary Rosa Pavanelli says that “This agreement is all about making it easier for corporations to make profits and operate with impunity across borders. The aim of public services should not be to make profits for large multinational corporations. Ensuring that failed privatizations can never be reversed is free-market ideology gone mad.”

Just because TISA is being pushed as a something that will enhance global trade does not mean this is pro capitalism or will benefit any of us. Free trade, and the entire ideology of responsible freedom itself, is individualistic in nature and tends to avoid forcing people to pick any specific option. Forcing local governments to privatize their water has nothing to do with freedom, although it does have something to do with capitalism’s influence on government. Such a top-down approach of a “world” organization setting up regulations that people must be forced to follow.


These “free trade” and “service” agreements, reminiscent of the North American Free Trade Agreement, have absolutely nothing to do with free trade or improving quality or services. As Noam Chomsky said more than 10 years ago, “the major tendency is towards transfer of power to private tyranny and away from the public sphere.. It’s happening in different countries at different rates, it’s happening internationally, and I think that’s going to be very harmful to values that we ought to share, like democracy.”

Agenda of Trade in Services Agreement - July Round

July publication of Chapters and Annexes of the TiSA text under negotiation.

Do not forget WHO are behind these agreements:  (For USA, read The Bilderberg Group)