Emmanuel Macron, the French presidential contestant, a member of the Bilderberg/Illuminati clan?? 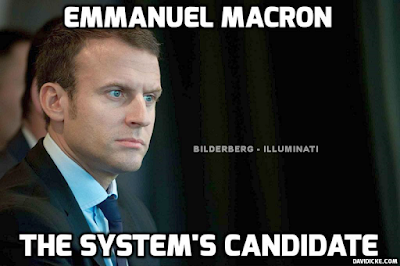 45 minutes into my search for information on Emmanuel Macron,
the French presidential contestant,I've already found something
absolutely HUGE!

In 2010, Macron left the Commission To Improve French Growth for a job at ROTHSCHILD & CIE BANQUE in Paris, despite having no experience in acquisitions and mergers. He became an overnight millionaire, and quit his job for Rothschild to seek political office. He only served 18 months in the Ministry of Economy, Industry and Digital Data before seeking the Presidency.

Let's think about this. He was given a multi-million dollar job in a bank owned by the Rothschild family despite having no experience in banking, then quit to seek a $70K a year political office, in a field that he also had no experience in, before running for President of France.

It gets better. His political party, "En Marche", is funded by BNP Paribas, a French bank owned by the Rothschilds!.

He is a Rothschild agent being groomed for the Presidency.   Spread this everywhere.

An obvious set up by the global elite to save their New World Order.