WHY IS OBAMA ALLOWING FETHULLAH GÜLEN TO OPEN ISLAMIC CHARTER SCHOOLS ON US MILITARY BASES?

Lest there be any doubt about the objectives in the United States, the strategy of subtly indoctrinating school children into the Gülen movement is a familiar one overseas, and there is great peril in allowing it to flourish in this country. In his native Turkey, Gülen created a network of hundreds of schools that have produced – over the past three decades – a vast cadre of followers now prepared to perform his bidding from official positions in government, law enforcement, the judiciary and the media.


A SECRETIVE ISLAMIC MOVEMENT RUN BY FETHULLAH GÜLEN IS TRYING TO INFILTRATE THE U.S. MILITARY BY ESTABLISHING AND OPERATING PUBLICLY-FUNDED CHARTER SCHOOLS TARGETED TOWARD CHILDREN OF AMERICAN SERVICE PERSONNEL.

EDITOR’S NOTE: Today we bring you the story of Fethullah Gülen, the shadowy Islamic billionaire who lives in a remote compound in Pennsylvania. He has created his charter schools all over the world as a cover to spread the message of Islam, and now he has set his sights on opening these schools on military bases in the United States. He has the full approval of the Obama administration to do so.


That charge may sound like a conspiracy theory from the lunatic fringe, but it is real and it is happening right now.  The most immediate threat is in Nevada, where Coral Academy of Science Las Vegas (CASLV) is currently negotiating with the United States Air Force to locate a charter school at Nellis Air Force Base, with classes starting this fall.  What is not widely known is that CASLV is part of a nationwide organization of charter schools and other businesses headed by Islamic cleric Fethullah Gülen, a reclusive but influential Imam living under self-imposed exile in Pennsylvania to avoid criminal prosecution in his native Turkey. 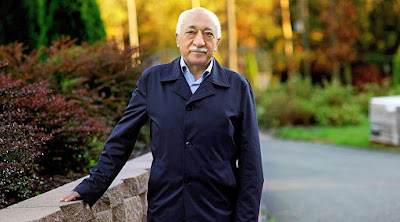 If you can believe in unicorns and magic and fairies, then billionaire Fethullah Gulen is the Gandhi of Islam, as he presents himself. Gulen’s website describes him as Muslim scholar, thinker, author, poet, opinion leader and educational activist. With a self-description like that, is it any wonder that many in the U.S. government support Gulen?

Living in mysterious isolation on a large, rural estate in the Poconos, Gulen – originally from Turkey – is among Islam’s most powerful preachers. To the Western world, in English language media outlets and marketing materials, he espouses a message of tolerance and dialogue longed-for in the West.

However, as more information about Gulen materializes – mainly from his former followers – it is becoming increasingly clear there is more to the Gulen philosophy than appears on his website or his pre-recorded English speeches.

Today, there are between 3 million and 6 million people – mostly Muslims – around the world who idolize Gulen. His followers have founded a worldwide web: schools in 140 countries, a bank, media companies, an insurance company and 17 universities in Turkey alone.


They have infiltrated and risen to positions of power in the Turkish government and civil services, artfully accelerating the Islamization of Turkish society. These followers are Gulen’s proselytizers and teachers. But they are not espousing the messages of peace and love presented on the web. They are championing an Islamic revolution – an educational jihad.

Islam itself, of course, is not dangerous. Gulen, however, is the most dangerous kind of Islamist. What makes Gulen so dangerous?

In an article published by Der Spiegel, people who have broken away from the Gulen religious community (known as the cemaat in Turkish) characterize the movement as a sect not unlike the Church of Scientology, where Gulen is their guru, an ideologue that tolerates no dissent. The former followers tell Der Spiegel that Gulen is only interested in power and influence, that he dreams of a new age in which Islam – his Islam – will dominate the West.

“It is the most dangerous Islamist movement in Germany,” Ursula Spuler-Stegemann, an Islamic scholar in the western German university city of Marburg told Der Spiegel. “They are everywhere.”

“The Fethullah movement is regarded as the most powerful and influential Islamist organization in Turkey,” reports the Middle East Media Research Institute (MEMRI) in a 2007 report on the Turkish elections.

Gulen indoctrinates his followers through “Houses of Light,” monastery-like dormitories where residents are dictated when they will work, pray and sleep. They are forced to read Gulen’s teachings and the Koran. Residents of these houses are also expected to proselytize and told who to marry – usually people of influence who can expand the fold.

Further, Gulen has also opened a sophisticated network of schools – more than 100 educational facilities in Germany alone and another 140 “charter schools” in the States, among many hundreds of schools and colleges in other countries. His mantra: “Build schools instead of mosques.” It seems Gulen is building schools that are mosques.

“We open a house somewhere and, with the patience of a spider, we lay our web to wait for people to get caught in the web; and we teach those who do,” Gulen said in a sermon uncovered by MEMRI in 2007.

“You must move in the arteries of the system without anyone noticing your existence until you reach all the power centers … until the conditions are ripe, they [the followers] must continue like this,” Gulen said in a sermon that was publicized on Turkish TV in 1999. “The work to be done is [in] confronting the world.”

In a separate sermon, also aired in 1999 on Turkish ATV, Gulen told followers “a nation is being born again.”

In the case of the recent closure of Zaman newspaper in Turkey, under the circumstances, the Turkish government can nary be impugned. Zaman is the “house organ” of the Gulen Movement and unlike independent and mainstream media in the West, Zaman exists exclusively to promote Gulen’s views and policies.

It is time U.S. officials and media pay attention to the claims by Gulen’s former followers as more than just fodders by those who want to harm the Gulen movement or, worse, as conspiracy theories. He is building this international empire from his U.S. base – and the U.S. is not immune.

Maayan Jaffe-Hoffman is director of international communications for a leading Israeli think tank and has been a journalist for 20 years. She is a former breaking news editor for the Jerusalem Post and a former editor-in-chief of the Baltimore Jewish Times. She has written thousands of articles relating to international relations and politics, which have been published by media outlets in the U.S., Israel and around the world.

A Guide to the Gulen Movement's Activities in the US :>

**
Another piece of the puzzle revealing the conspiracy between the global oligarchs,Fethullah Gulen and George Soros.